How do I get from Madrid airport to the city Centre?

Is this your first time in Madrid? In this article we tell you how to get from Barajas airport to the city centre of Madrid without getting lost. Continue reading!

The easiest option to get from the airport is to take a direct bus from the terminal where your plane lands to the city centre. Bus 203 or Bus Express Aeropuerto is a bus that connects the airport with different areas of Madrid city centre: O’Donnell street, Cibeles and Atocha squares, with a non-stop schedule, 24 hours a day, despite the fact that if you arrive in Madrid at night (between 11:30 pm and 6 am) it does not stop at Atocha.

The bus is easily recognisable by its yellow colour, different from other buses in Madrid, which are blue. The trip costs 5 euros and takes a short time to get there, between half an hour and 40 minutes, as there are just few stops. You can pay on the bus in cash, by credit card or by contactless mobile payment. It’s definitely the best option if you land early in the morning or if you don’t want to get lost. 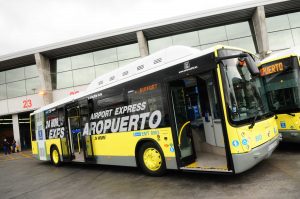 There is also a bus that connects all the airport terminals with the Avenida de América bus station, 2nd floor gate 11. This 200 bus runs from 5am to 11:30pm, and costs only 1.5€. (From that place you'll have to take another bus or the metro.) And pets are allowed! Although they must be muzzled and on a leash.

Another option is to take the metro to get around. In Madrid we have a very extensive underground network, which covers almost all areas of the urban area and many suburbs. From the airport, you should take line 8, the pink one, which connects the different terminals with Nuevos Ministerios station, right in the centre of Madrid and very close to the school. The journey is very quick, taking only 15 minutes.

However, this option has some drawbacks: the metro only runs during the day, until 1:30 am and from 6 am onwards; each ticket costs 1.5 €, but you have to add a supplement for going from the airport, which is 3 € more, and the price of the transport card that you have to buy at the machines or ticket offices at the station, which is 2.5 € more. In total, that would be 7 euros.

If you have the tourist pass for that day, the trip from the airport would not cost you anything, it would be included. If you have the pass, even if it is not valid on the day of the trip, you can charge the metro ticket directly to the pass, and you would save 2.5 euros on the metro card. Are you coming for many days? We recommend that you buy a monthly pass, which includes all the journeys you make during that month, by metro, bus or train, as well as this journey from the airport. The monthly pass in Madrid only costs 20 euros if you are under 26 years old.

Please note: as you can see in the image, there is a stop on this metro line called "Barajas", which has nothing to do with the airport. The airport stops are Aeropuerto T1 T2 T3 and Aeropuerto T4.

From the airport you can also get to the city centre using the Cercanías (short distance train). Specifically, Line C-1, which connects the airport with Atocha, Nuevos Ministerios and Chamartín stations, among others (see below the image with all the stops). It takes 30 minutes to get from the airport to Atocha. The journey costs €2.60, plus the price of the rechargeable card, which is 0.50 euros.

If you have the monthly pass for zone A, the journey would be free because it would be included in the fare. The first train leaves the airport's Terminal T4 at 6am and the last at 1am (the train does not run between these times).

This is the cheapest option and, although the train does not stop at all airport terminals, once at T4 there is a free shuttle bus that runs to all terminals and takes very little time.

Taxis in Madrid have a flat rate of 20 euros for journeys between the airport and any place in the city centre (M-30). These 20 euros are charged regardless of your destination and cover 10 kilometres from there. After these 10 kilometres, you will have to pay the price indicated on the taximeter of the car (a device that taxi drivers have and which increases the price as the vehicle is been driven).

Travelling by taxi is convenient if you have a lot of luggage and is practical if you want to arrive early and directly at your destination, but it is the most expensive option of all. In case you come with friends, you might share the journey with them, or when you return to the airport with friends from school to travel back home.

Lastly, there is Cabify or Uber to get from the airport. They usually charge a similar price to what is charged by taxis for the same journey, but in this case you would know in advance how much you are going to pay and you would be sure that the price would not be increased unexpectedly. And, of course, there is also the option of sharing with friends to make it cheaper.

As you can see, there are several ways to get to the city centre from Barajas. Just choose the one that suits you best in terms of price, distance and time. Take care and see you at the school!

INHISPANIA INTLANCE S.L. uses its own and third-party cookies to analyze our services and show you advertising related to your preferences based on a profile made from your browsing habits (for example, pages visited). You can obtain more information and configure your preferences in "Settings".

Cookies necesarias: son cookies absolutamente necesarias para posibilitar la navegación a través de la web o utilizar elementos de seguridad. Estas cookies no almacenan ninguna información personal. Cookies no necesarias: son cookies cuya finalidad es analizar tu comportamiento en la web, mostrarte publicidad relacionada con tu comportamiento y para interactuar con redes sociales. Estas cookies pueden deshabilitarse.
Necessary Always Enabled
Necessary cookies are absolutely essential for the website to function properly. This category only includes cookies that ensures basic functionalities and security features of the website. These cookies do not store any personal information.
Non-necessary
Any cookies that may not be particularly necessary for the website to function and is used specifically to collect user personal data via analytics, ads, other embedded contents are termed as non-necessary cookies. It is mandatory to procure user consent prior to running these cookies on your website.
SAVE & ACCEPT
× How can I help you?