7 neighborhoods in Madrid you have to visit

Madrid is a city well known worldwide for its cultural diversity. It offers a wide variety of leisure plans for visitors and residents. In this post, we will recommend you seven very characteristic neighborhoods that you can’t miss if you visit Madrid. Are you ready? Keep reading!

Very close to Puerta del Sol there is La Latina neighborhood, a very pleasant place to go for a stroll and to taste tapas. This area between Lavapiés and Madrid de los Austrias is characterised by its narrow and irregular streets. In the past, many merchants who came to the capital to sell their products used to live here. This explains the names of the streets in this area: ‘Plaza de la Cebada’, ‘Plaza de los Carros’, ‘Plaza de la Paja’… Today this commercial tradition is still going on, and every Sunday different shopkeepers put on the traditional Mercadillo de El Rastro (next to Embajadores Square, continuing up Ribera de Curtidores Street and ending at Cascorro Square). It takes place every Sunday at lunchtime and is the best opportunity to find books, posters, birds, furniture and a variety of antique objects all in the same place. It’s a place not to be missed if you’re curious. The people who are used to going also sometimes are quite eccentric, and worth seeing and meeting. 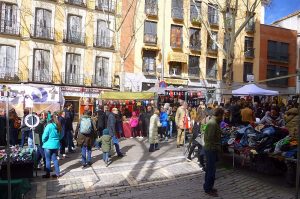 There are also many bars in this area where you can eat for not too much money. In particular, there is a market, Mercado de la Cebada, where you can eat inside. You buy fresh food from the market stalls, and they cook it right in front of you. You can eat it at the market’s terrace or, if you don’t find a free place, wherever you can, people even eat on the stairs or next to the stalls! It's worth a try.

Going down towards Puerta Toledo Square, there is a church that locals commonly say that is one of the most beautiful in the city, it’s called Basilica of San Francisco El Grande. In neoclassical style and with canvases by Goya and Zurbarán, it’s one of the churches in Madrid that worth a visit the most. Although, maybe it’s better if you try to enter during mass hours so you don't have to pay an entrance fee. It has the largest dome in Spain and the fourth largest in Europe, and on one of its sides you can find a viewpoint, not very frequented by tourists but very pleasant for watching the sunset over Madrid. 😉 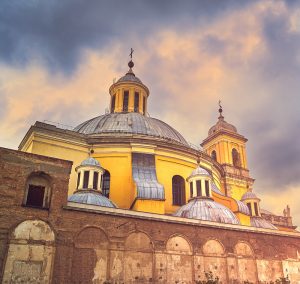 Lavapiés is undoubtedly other obligatory stops when you come to Madrid. There you will find people from all over the world because it is probably the most multicultural neighborhood in the city. It is right between Puerta del Sol and Embajadores Square. There you can enjoy the most varied gastronomies: Indian, Chinese, Argentinean, Senegalese food... Once a year there is a tapas festival called Tapapiés in which each restaurant or bar prepares a tapa from their country and for only 1€ or 1,50€ you can buy a drink and a tapa. People usually download a map with all the bars and the tapas they offer, and go from bar to bar eating and drinking with friends.

In this neighborhood there are various tourist routes to discover its street art, with graffiti and murals, some of them by artists of national and international renown, such as Okuda or Parsec! (who is a part-time teacher of Spanish in our school too!)

Indeed, Lavapiés is a very interesting place for those who like culture and art. You can find many small theatres where you can see alternative and critical plays, not the ones normally offered in the big theatres, aimed at large audiences and designed to achieve big sales. In particular, at Escalera de Jacob you can see cheap improvisation theatre shows and have fun with friends while you have some beers.

There is also an old building in this district of Madrid that is well worth a visit. It is called La Tabacalera and is an old tobacco factory that has been transformed into an arts centre. It hosts theatre workshops, film conferences, dance meetings, photography exhibitions... It is a very underground space, perhaps the most alternative in Madrid together with the La Neomudéjar art centre, near Atocha Square.

Huertas is the neighborhood par excellence dedicated to artists. In fact, it is also known as Barrio de las Letras because well-known writers from the Golden Age lived there, such as Cervantes or Lope de Vega, whose house you can currently visit. As you walk around, you'll see fragments of works by great Spanish writers such as Bécquer and Luis de Góngora written on the pavements. We highly recommend you getting lost in its streets and spending long hours in one of its charming cafés while you read, listen to music and enjoy a good coffee. Especially, there is a very strange one, full of cats!! La Gatoteca is a charity café that helps stray cats find homes while they accompany visitors. You can have a coffee, a soft drink or a tea surrounded by cats and buy one afterwards if you happen to be fond of it.

You should also go to this neighborhood at night, because it's full of pubs with live music! You enter to any of them, because it will be worth it. We recommend La Fídula and Café Central, where you can enjoy live jazz concerts while you dine (and the cocktails in the latter are very tasty).

Moreover, if you like handicrafts, on the first Saturday of every month a street market is organised in Huertas, called Mercado de Las Ranas, where shops owners bring their products and you can find all kinds of antiques or handmade jewellery with unique designs at affordable prices. Nearby is Santa Ana Square, full of terraces with the best atmosphere where you can have tapas after the street market and where you can listen to street musicians. 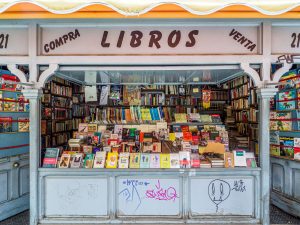 Next to the school there is the Malasaña neighborhood, between Fuencarral Street and Gran Vía Street. It is a popular area for young people, with lots of shops for all tastes where you can go shopping in the afternoon and where you can go out at night. There is an ice-cream parlour with liquid nitrogen ice cream (N2LAB), second-hand clothes shops by weight (Flamingo Vintage Kilo), geeky shops (Curiosite) and an interactive theatre with a maximum audience of fifteen people where you are really next to the actors (Microteatro). It's great fun to wander around the streets, because you'll find shops and things you'd never have thought you'd find. We love getting lost here.

The neighborhood is closely linked to a cultural and political movement that appeared in the 1980s called the Movida madrileña, which took as its banner the figure of Manuela Malasaña, an embroiderer who joined the defence of the city against the French Army. In fact, before that, the neighborhood was called Barrio de las Maravillas. At that time a multitude of filmmakers, musicians and artists of all kinds began to frequent its bars (Penta, Vía Láctea, Palentino). Nowadays, there are tourist companies that offer a guided tour through the bars of that time, with a drink included!

Nowadays Malasaña is home to all kinds of people, but above all bohemians and hipsters. Have you been there? Have you come across them? Nothing to do with the famous Gran Vía heavies, with their leather clothes, their metal spiked accessories and their dirty long hair. 😜 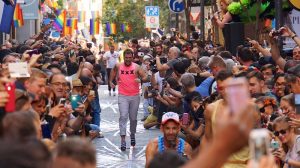 Another typical place in Madrid is Chueca. This neighborhood has gradually become a symbol of modernity, tolerance and respect for its historical importance in the LGBT Movement.

Years ago, a few bars and shops specialising in gay themes began to spring up, and over time many others have joined in to create a reference point for the gay community around the world. Every June the 28th (the first Saturday in July), Chueca becomes the epicentre of Pride. LGBT Pride Festival celebrates diversity of thought, identity and sexual orientation for a week. The activities organised include a parade along the Paseo del Prado, the Spain Mister Gay contest and a race between people on high heels (upper photo). It is undoubtedly one of the best places to have a drink with friends or go out to dance and have a good time, especially if you are in Madrid during the Pride festivities.

There are also several interesting buildings to visit in Chueca: 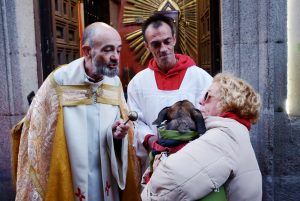 The Salamanca neighborhood is not in Salamanca, but in Madrid. It is so-called like this because the Marquis/nobleman of Salamanca promoted its development as the centre of the aristocracy in the city. It is undoubtedly one of the most elite, expensive and ‘posh’ neighborhoods you can find in the capital. In fact, it is called Milla de Oro due to its exclusive fashion shops and the high purchasing power of the locals who live there. It is right next to Colón Square and Castellana Street, and its neighbours were traditionally the country's political and economic elites.

There you can find luxury brands such as Gucci, Massimo Dutti, Manolo Blahnik, Rolex or Boss, and eat in MICHELIN-starred restaurants such as Ramón Freixa Madrid (2 MICHELIN stars).

In the Salamanca neighborhood we can find emblematic places such as the Retiro Park, a UNESCO World Heritage Site built in the mid-17th century for the enjoyment of the King. It is the perfect place to unwind for locals and tourists. You might have seen photos of people on little boats in a pond, it’s this place!

The Spanish National Library is a building with a collection of the most important works of the country's bibliographic and documentary heritage. You can visit you can visit the inside and see the exhibitions in there, check its website here to find out the opening hours.

The Plaza de Las Ventas (bullring) is also a place in this neighborhood, where the most important figures of Spanish bullfighting have fought and where bullfights currently still take place.

If you are in this area at night, we higly recommend you going to Platea, one of the biggest gastronomic centres in Europe where you can have dinner or drinks while you enjoy a circus or magic show, or a live music concert. Its interior is amazing. 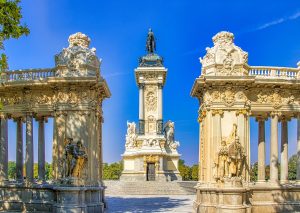 Finally, Gaztambide is the favourite district in Madrid of the youngest people and partygoers. Due to its proximity to the Complutense University of Madrid and the large number of university student residences nearby, it is an area where thousands of young people live and every weekend it becomes a famous place to go to party. There are many pubs and clubs with all kinds of music, from rock to pop to the trendiest reggaeton songs. Years ago it used to be a meeting point for different urban tribes, especially for heavies, rockers and punks.

The rockers go to the Bajos de Argüelles, called like that because they are in the Argüelles area and you have to go down some stairs to get to the pubs and clubs (they are behind the houses and office buildings). Don't be intimidated by the appearance of the bartenders or the dirty, graffiti-filled walls, because this aesthetic is part of its history and its essence as an underground and protesting place.

You can also taste there hidromiel (‘mead’), an alcoholic beverage produced by fermenting water and honey, which is said to be the ‘beer of the Vikings’. 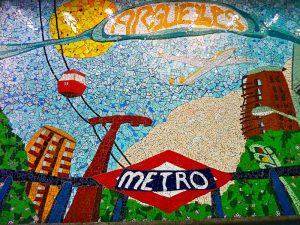 We hope this article has helped you to decide which places you want to visit when you come to Madrid. You will always find fascinating things around every corner. Indeed, if you follow our Instagram account (@inhispania), we'll give you some tips so you don't miss out on the most fun things to do in the city at the time you come. See you in Madrid!